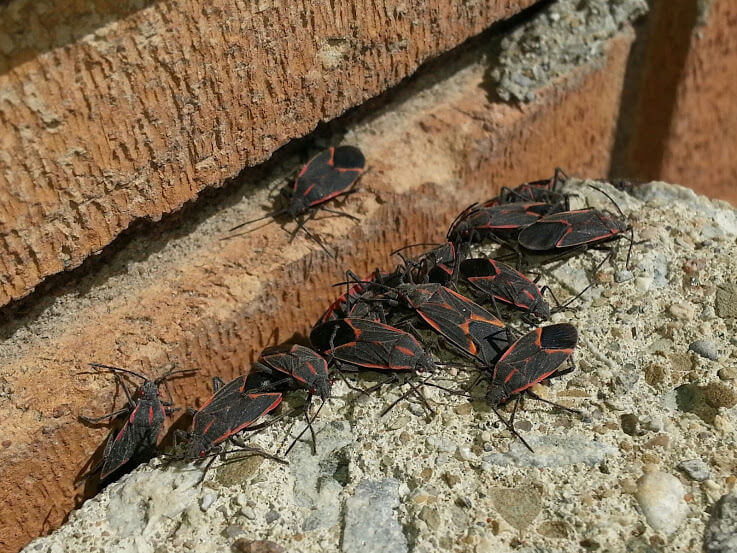 As the days start to become warmer, people will begin to notice the emergence of Boxelder bugs. These bugs can cause people some worry, as they look very intimidating and are usually found in large groups. They hibernate inside of walls and soffits in the winters. These bugs emerge from their winter sites during spring. They will try to move outdoors but many remain trapped inside. Good news for homeowners- they do not reproduce in homes — all the boxelder bugs seen inside during winter and spring entered buildings the previous fall.

How to identify a boxelder bug

When full grown, the boxelder bug is about 1/2 inch long and one-third as wide. Adults are mostly black and have three red lines on their back and several fine red lines on each wing. The wings lie flat on the bugs back when it is at rest. The abdomen is red. The young nymphs are bright red and when approaching adulthood, become marked with black and begin to develop black wing pads. Eggs are yellow when first laid but become red as nymphs develop inside.

Adult bugs feed on low vegetation and seeds on the ground during spring and early summer, and begin mating a couple weeks after they started feeding. Starting in mid July, they move to female seed-bearing boxelder trees.
During late summer and fall, boxelder bugs start to leave the trees from where they were feeding to find protected areas for the winter. Although nymphs may be present in the fall, only fully grown adults survive the winter. Adult boxelder bugs typically can fly several blocks, although in some cases they can travel as far as two miles.

What makes your home vulnerable to boxelder bugs?

Some homes are especially attractive to boxelder bugs, others are not. This usually depends on the amount of sun exposure the house has, as the bugs like to sun tan together in large groups. Boxelder bugs like warm areas and are attracted to buildings with a large southern or western exposure. Buildings standing taller than surrounding structures or standing isolated on flat ground can also attract large numbers of boxelder bugs.

When the weather gets colder, boxelder bugs squeeze into cracks and spaces around homes. In some cases they end up in the interior of buildings where they are often found around windows. They remain active until it becomes cold, which could continue into winter when the weather is mild. Other boxelder bugs end up in sheltered areas in walls, attics and similar areas where they remain until it warms up.

During winter, boxelder bugs are generally inactive. However, during mild, sunny days, boxelder bugs become mobile with the increased temperature. They enter a home’s interior from overwintering areas within the home, e.g. in walls or attics. As they wake up, they follow the warmth into the home’s living quarters. Once there, they typically move towards windows and other sunny areas. However, the warmth does not reach the insects equally and they do not all become active at the same time.

Indoors, the bugs can be a major problem. While they don’t normally cause structural damage to homes or contaminate food sources (individuals will occasionally show up in dried beans and flour if not stored in tightly sealed containers), they can be a source of filth, odor, and displeasure due to their sheer numbers. The feces of the bugs can stain walls and furniture.

Warm weather or an increase in home heating may convince individual boxelder bugs that spring has arrived and they will enter a family’s living space in search of a way outside. In late summer and autumn, they gather in groups much like swarms of bees on the sun-facing, preferably white side of homes and garages where their sheer numbers will discolor the building’s side if allowed to stay.

How to protect your home from boxelder bugs

Indoor and outdoor boxelder control is interrelated. Denying places in your home for boxelders to overwinter means fewer numbers laying eggs in your trees next spring and summer.
Adult bugs live and breed on the leaves of box elder trees, laying their eggs in spring. Removing alder tree that are close to your home from your property may reduce their numbers and the chances of an infestation. Other ways to try and combat boxelder bugs include:

•Repairing or replacing damaged window and door screens.
•Repairing or replacing damaged screens in roof and soffit vents, and in bathroom and kitchen fans.
•Seal areas where cable TV wires, phone lines, and other utility wires and pipes, outdoor facets, dryer vents and similar objects enter buildings.
•Eliminate hiding places such as piles of rocks, boards, leaves, and general debris close to houses. Boxelder bugs hide during the day or overwinter in these sites.
•Install door sweeps or thresholds to all exterior entry doors. Install a rubber seal along the bottom of garage doors.
•Check the outside surfaces for spaces and cracks that may allow insect’s easy entry, sealing any openings 1/8th inch in size or larger. This will not eliminate all boxelder bugs but it can significantly reduce the number entering buildings.
•Sprinkling borax or diatomaceous earth at the bottom of window sills and around door jams will discourage their entry.
•Seal cracks and spaces around doors, windows, roof lines, and fascia boards and other areas where vertical surfaces meet horizontal ones.
•Rake leaves and remove weeds and grass from a 6- to 10-feet wide strip around the foundation, particularly on the south and west sides of the house.
•Also check for gaps and cracks where different materials meet, such as brick and wood siding. Seal cracks with caulk, such as silicone, elastomeric latex, or silicone/acrylic.
•Installing door sweeps on exterior doors
•Keep the area near your homes foundation weed and debris-free

Once boxelder bugs are found the best option is to physically remove them with a vacuum or a broom and dust pan. If this occurs during fall, check around the building exterior because they can often be found congregating in sunny or warm areas. If they are close to entrances, an insecticide may be required to prevent their entrance into a home.

Keep your home pest free during this spring and summer by calling a Truly Nolen Canada pest control professional to schedule a free inspection. 1-888-832-4705.