A buzz flutters passed your ear. Out the corner of your eye there’s a hovering black ball. It comes close and gets your attention. Your first reaction is to swat. Your day outside is dampened by the terrifying wasp. Eating outside has become a feat for the adrenaline junky.

Although many people are terrified of wasps, they are common in Hamilton during the warmer months. The types of wasps in Ontario are Yellow Jackets, Bald-Faced Hornets, Paper Wasps and Mud Daubers. We would all like to keep any type of wasp at arm’s length, but sometimes they get into your home and build nests on your property. 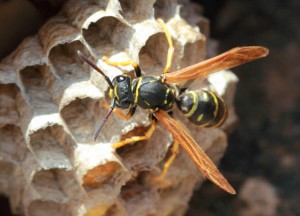 At the end of summer wasps are almost excessive. They never use the same nest twice. They begin constructing as soon the new queens emerge from hibernation. When the queen finds a safe place it begins to build. After a few weeks it lays eggs and the worker wasps continue the construction. Throughout the summer the nest grows. By Autumn, wasp colonies stop breeding new workers and when it gets cooler they go back into hibernation. Then the following summer it starts all over again.

Aerial Yellow Jackets and Bald-Faced Hornets make large hanging nests. They are commonly found in trees, bushes or under decks. The other Yellow Jackets have their nests in the ground. It is extra difficult for homeowners to detect them going unnoticed until it’s disturbed. Wasps generally come into your house to nest, hibernate or by accident. Any of these circumstance can result in large colonies built in your attic or window frames.

It’s important to keep an eye out for signs of an infestation on your property and get rid of wasp nests early. If the wasps feel the queen is in danger they will attack. Stings can lead to dangerous situations and serious health concerns. So, if you stumble across a wasp nest in the last weeks of summer it’s a good idea to stay away and call a local Hamilton professional like Truly Nolen Pest Control.

Are There Wasps in Your House This Winter?